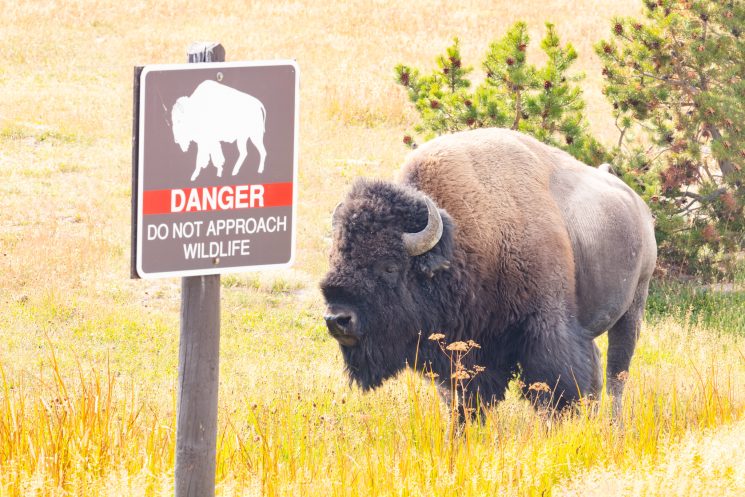 It doesn’t matter how many times you tell a stupid tourist, they always try to press their luck in places like Yellowstone. These people are laughing but have no idea how close they just came to losing a child.

There is no such thing as a “tame” buffalo.

One flick of the head will break your jaw.

One the step of a hoof will crush your skull.

Do not approach a bison, ever.

Tips to avoid angering a Bison


1.) If you encounter bison along the roadway, drive slowly and they will eventually move. Do not honk, become impatient or proceed too quickly. Bison attacks on vehicles are rare but can happen. Bison may spook if you get out of your vehicle. Therefore, remain inside or stay very close.

2.) If you are on foot or horseback: Never startle bison. Always let them know you are there. Never try to chase or scare bison away. It is best to just cautiously walk away. Always try to stay a minimum of 100 meters (approximately the size of a football field) from the bison.

3.) Please take extra caution as bison may be more aggressive: During the rutting season (mid-July-mid August), bulls can become more aggressive during this time. After bison cows have calved. Moms may be a little over-protective during this time. When cycling near bison, cyclists often startle unknowing herds. When hiking with pets. Dogs may provoke a bison attack and should be kept on a leash. On hot spring days when bison have heavy winter coats.

4.) Use extreme caution if they display any of the following signs: Shaking the head. Pawing. Short charges or running toward you. Loud snorting. Raising the tail.

What if Buffalo charges you?


In Yellowstone National Park, bison have injured twice as many visitors as have grizzly bears. The danger in a bison/human encounter is being butted, gored, and stomped by something that resembled a fur-covered locomotive.

There is a reason why there is a rule that visitors should stay at least 100 yards from bison. Generally, after a bison is charged and knocks down a human, the animal will wander off and resume grazing, but not always. On a couple of recorded occasions, the bison stood over the victim.

One person was head-butted back to the ground when she tried to get up, and another was gored several times while still on the ground.

If a bison charges: